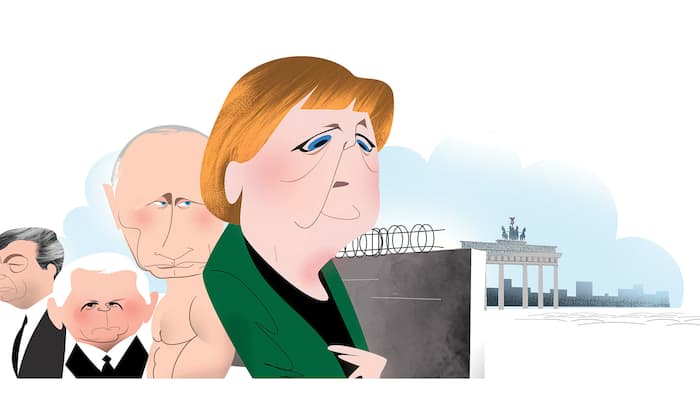 ‘Merkel, Putin, Orbán and Kaczynski were all shaped by the 1989 revolutions’

On November 9 1989, a 35-year-old physicist in East Berlin saw the startling news on TV that the border with West Germany was opening. But she didn’t rush to the Berlin Wall. Instead — in the definitive display of her trademark patience — Angela Merkelwent to the sauna, as she did every Thursday evening. Only afterwards did she walk to her local border crossing and into West Berlin. She drank beer in a stranger’s home in the west but made sure to get back to bed on time, because she had work the next morning.

One month after the Wall fell, exultant East German protesters surrounded the KGB’s mansion in Dresden. A 37-year-old KGB lieutenant-colonel named Vladimir Putinphoned the local Soviet military to ask for reinforcements but was told that nothing could be done because, “Moscow is silent”. Putin would never forget that moment. Meanwhile in Budapest, the 26-year-old lawyer Viktor Orban shot to fame after a speech demanding that Soviet troops leave Hungary. Over in Poland, the velvet transition from communism left the Solidarity official Jaroslaw Kaczynski so disappointed that he began his long battle to complete the revolution.

Today, these four people lead their countries. Merkel, Putin and Orbán have done so for a combined 37 years, while Kaczynski is Poland’s unelected power behind the throne. All four were shaped by the 1989 revolutions.

Putin had witnessed the first successful nationalist uprising against Soviet rule. Deserted by Moscow, he had gone out into the Dresden street alone — “in spirit, bare-chested”, adds Timothy Garton Ash, author of the book We The People, on the 1989 revolutions — and told the protesters, in German, that anyone entering the mansion would be shot. The crowd duly backed off. But the East German agents Putin worked with had their lives ruined, the country he liked so much vanished, and the Putin family ended up driving back to Leningrad with little more than a 20-year-old German washing machine. The lesson he drew from the 1989 revolution was: never again. Putin concluded that if Moscow hadn’t been silent and weak, it could have crushed the mob. Garton Ash told me: “Everything Putin has been is about trying to ensure the revolution does not happen in Moscow. He is the counter-revolution.”

In 1989, Merkel lived in East Berlin’s Prenzlauer Berg neighbourhood. Today, the “Prenzlberg” is totally gentrified, but when I moved there in 1990 some of the rundown apartment buildings still had bullet holes from the second world war, telephones were rare and the air reeked of black coal. Prenzlauer Berg had attracted East Germany’s bohemians, and, in 1989, most of them dreamt of a new, better system than West German democracy. Merkel didn’t, says Garton Ash. She simply wanted to do West German centrist politics, but better. The veterans of 1989 who went on to capture power were the realists.

For Merkel, the end of East Germany was unambiguously positive. She emerged from the sauna and was free. No longer would she have to run communist “agitation and propaganda” at her workplace, East Berlin’s Institute for Physical Chemistry. She also appreciated the DM100 in “welcome money” that West Germany handed out to East Germans. Later, she instinctively wanted to pass on this experience of welcome to future freedom-seekers. Last year’s opening of German borders to one million refugees has “a very strong ’89 connection,” says Garton Ash.

Today, as Merkel sits in the chancellery, 5km from her old flat, she remains marked in another way by 1989. She feels that just as East Germany collapsed in a night, so could the European Union and all that goes with it. Stopping that from happening is her unspectacular political mission.

Poland had no single revolutionary night in 1989. Rather, Solidarity and the ruling communists negotiated a transition. It had to be that way, as there were still Soviet troops in Poland then, but Kaczynski, the editor of Solidarity’s weekly magazine, was left frustrated. His father, a veteran of Warsaw’s 1944 uprising against the Nazis, had raised his twin sons on tales of heroic resistance to foreign rule. In 1989, the Kaczynski twins “felt marginalised, left out by people in Warsaw”, says Garton Ash.

Today, Kaczynski aims to finish 1989’s unfinished revolution. That means rooting out the “communists”, whom he sees in every ministry, company and media outlet, and freeing Poland from foreign oppression — which, to him, now means Merkel’s Germany, Putin’s Russia, the EU, gay marriage and refugees. With hindsight, the 1989 revolutions were probably more nationalist than liberal.

Since 1989, Orbán has morphed from a liberal into an authoritarian but has always remained a nationalist. He seems to have figured out that in Hungary nationalist votes outnumber liberal ones. He may also feel that as a hero of his country’s revolution, he has a right to rule — a sentiment once common among Africa’s liberators-turned-dictators. For central and eastern European leaders, 1989 was only yesterday.